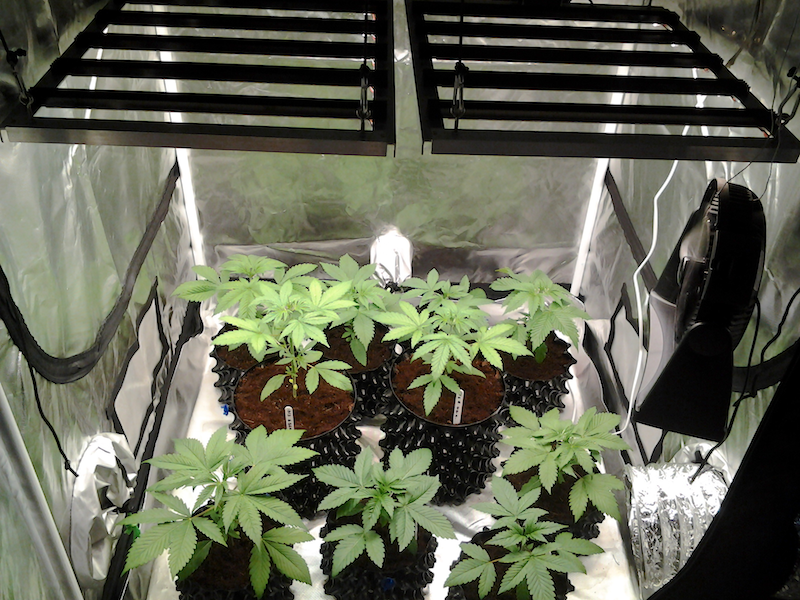 The most common question gardeners have when considering a SolStrip system is, how much light do they need for their space? Because LEDs are so much more efficient than high-intensity discharge (HID) and florescent lights, the traditional rules of thumb for light intensity, expressed in watts per square foot, aren’t applicable to SolStrip systems.

Current state-of-the-art white LEDs are up to 50% more efficient than HID lamps such as metal halide and high-pressure sodium lights. That huge boost in efficiency not only means more light per watt consumed, but also less heat given off by the lamp. SolStrips leverage that efficiency further with distributed diode technology, which spreads the light emitters, and the heat, across a much larger area than HID lamps or even COB lights.

Together that means that SolStrip lamp systems deliver more light per watt and can be placed much closer to the canopy, where they will deliver that light much more evenly and coolly than HID lamps. All  of these factors must be considered when estimating light needs using SolStrips.

The rule of thumb you should use when planning a SolStrip system is 20-30 watts of light per square foot for vegetative spaces, and 30-40 w/sf for bloom spaces. For a mixed veg/bloom space use 35 w/sf. These are fairly broad ranges admittedly, but be wary of operating outside of them. Below 20 w/sf will result in stretching and thinning of vegetation; above 40 w/sf can lead to bleaching and die-off of tops.

Practically speaking, that means you can estimate coverage for SolStrip systems using 30 w/sf and running your system at 100% of potential output:

These are guidelines only. If you plan to run your lights softer, or higher than 12”, you’ll need to account for that in your estimate. For those willing to do a little math, there are better measures of photonic energy, i.e., light, that will deliver more accurate calculations based on values such as PAR and PFFD. We will explore those in a future post. But for basic planning in a typical indoor gardening space you can use these calculations with confidence.